About my father-in-law … and the connections to writing 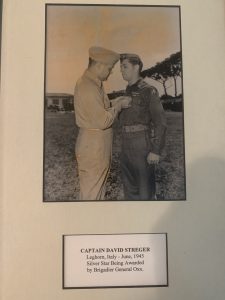 Tomorrow marks the 21st anniversary of the death of David Streger, my father-in-law, a man who exemplified what is meant by a person of The Greatest Generation. He graduated from Dickinson College in 1939 — Phi Beta Kappa — and served in the U.S. Army as an infantry officer in WWII. Shot several times, he was the recipient of a Purple Heart, Two Bronze Stars, and a Silver Star for bravery and heroism, ending up a Major.  The article on the award of his Silver Star reads, “…he led a spearhead task force of infantry and tanks in a whirlwind drive up the coast of Italy to capture Genoa.” As the Executive Officer of  the 473rd Regiment, he “was cited for action on April 14, 1945, when under heavy small arms, mortar and machine gun fire, he commanded a jeep…advanced badly needed ammunition to the front, where an assault had been halted for a lack of it.” The actual Silver Star citation reads, “Captain Streger’s  gallant and heroic action put an end to the stalled attack, restored the high morale of our troops, and pioneered a way for expediting our whole flow of supplies.”

As many of you know, I used his first name as the first name for my pseudonym (David Hirshberg), but what you don’t know is something that I wasn’t even aware of until yesterday— when I was rummaging through his mementos — that he was also an author of plays and short stories that he wrote before and just after the War. They are so much ‘of the time,’ reflecting the language and cadence of characters from the fast-talking actors of the movies and plays from the thirties and forties.

He was talented, and I wondered why he didn’t pursue his writing activities. Then it struck me that his decision was similar to mine, in that we both decided to plunge deeply into our respective businesses, as he and I had family to support and didn’t have the luxury of access to wealth. David Streger never returned to writing, although his cleverness and wit was to be found in conversations and short notes.

In any event, I’m glad I’ve had the opportunity to get to ‘know’ him a bit as a young writer, and this has cemented my strong bond with him.