Jews have historically been at the forefront of the Free Speech Movement in the United States.  Indeed, it was Jewish lawyers, working at the ACLU, who defended the right of neo-Nazis to assemble and march in Skokie, Illinois in 1977.  That case became a signature statement of the free speech priorities of the United States.  Supreme Court Justice Louis Brandeis wrote one of the seminal First Amendment cases that still guides much of the thinking on the First Amendment.  Yet, today, with anti-Semitism rising alarmingly all over the world, and with university life in Europe, Canada and the United States infected with a strain of violent anti-Semitism masquerading as anti-Zionism, one is left to wonder why the United States permits the unchecked weaponization of words and the trampling on human dignity that other western nations, also democracies, do not. The Talmud, after all, treats the humiliation of a fellow human being as a violent act.  The use of words to cause harm is almost always directed at Jews and other minorities.  Saving Free Speech … from Itself (https://amzn.to/33myFOd) was written to clarify these tensions in public discourse, and the confusions surrounding the First Amendment. It’s got a Foreword by Bret Stephens, columnist for The New York Times. You can’t categorize this book as left, center, or right. It wasn’t written from a political perspective. Refreshing, for a change. 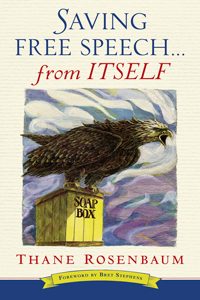