Foreword by A. J. Jacobs

BEDFORD, NY (February 9, 2016) — Fig Tree Books LLC, publishing the best literature of the American Jewish experience, announced today that it has acquired the rights to publish My Jewish Year: 18 Holidays, One Wondering Jew by Abigail Pogrebin. Publication is scheduled for March 2017. 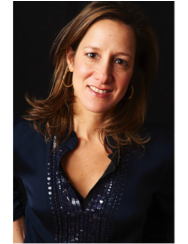 Based on Pogrebin’s series for The Forward, My Jewish Year reflects the author’s journey – spiritual and reportorial — into the heart of Judaism. “I had never lived a full Jewish year before, in the sense of adhering to every holiday ritual — major and obscure — prescribed by observant Jewish life,” Pogrebin said. “I am like so many American Jews who view the mandate to observe every annual milestone not only as daunting…but too late to attempt.”

For a year, Pogrebin observed every popular holiday (Rosh Hashanah, Yom Kippur, Passover), festival holidays (Sukkot, Hanukkah, and Purim), six fasts and every less-understood holiday (Shavuot, Shemini Atzeret, Lag B’Omer), seeking clarity and connection through deep research, revealing interviews, and celebrations that took her out of her comfort zone. In the process, she found a depth of community she won’t forget.

In a narrative tradition similar to A.J. Jacobs’s The Year of Living Biblically and Bruce Feiler’s Walking the Bible, Pogrebin digests this immersive experience with humor and wonder, reverence and irreverence, in a manner that is both accessible and inspiring to readers.

“Although there’s no consensus on the exact number of holidays called for by the Jewish calendar,” she said, “I was guided by the yardstick of Orthodox practice and by the meaning — in Jewish tradition — of the number 18, which represents the word ‘chai,’ or ‘life.’ As for the element of the ‘Wondering Jew’ —which is obviously a play on the motif of the ‘Wandering Jew’ — I truly began this project ‘wondering’ what the full Jewish calendar actually means, and what would happen to me if I followed it to the letter — how this expedition would alter my perspective and priorities.”

Fredric D. Price, Fig Tree’s founder and publisher, said, “For our first venture into the world of nonfiction, I wanted a memoir that chronicles and informs the beautiful and sometimes challenging mosaic of the American Jewish experience. My Jewish Year does precisely that. All Jews, regardless of affiliation (or lack thereof) will find Abigail Pogrebin’s book a wonderful roadmap — to better understand and treasure a heritage that offers meaning and real joy to those who care about Jewish identity and the Jewish future.

“The original articles that appeared in The Forward in 2014-2015 have been transformed and expanded into a profoundly entertaining and moving book that teaches without being didactic, and gently nudges us all to come along for the ride,” Price added. “It makes for superb Shabbat reading, not to mention a perfect b’nai mitzvah or Hanukkah gift – Hanukkah being one of the holidays that I’ll forever view differently now that I’ve read Abigail’s account.”

About the Author: Abigail Pogrebin has become a rare voice among American Jews, as a journalist and an explorer who shares with refreshing wit and candor her peripatetic search to finding a meaningful Jewish life. A former producer for 60 Minutes and Charlie Rose, and author of Stars of David: Prominent Jews Talk About Being Jewish and One and the Same: My Life as an Identical Twin and What I’ve Learned About Everyone’s Struggle to Be Singular, she has her own interview series at the JCC Manhattan, has moderated events at the 92nd Street Y, and served as a co-author of Newsweek’s annual Top 50 Rabbis list. Follow her on Facebook.

About Fig Tree Books: Fig Tree Books LLC, established in 2013, publishes literature that enlightens the unique American Jewish experience. Its titles include novels and memoirs from debut and previously published authors as well as important works that have gone out of print. Books are published in print and e-book formats and distributed to the trade by Publishers Group West, a Division of the Perseus Book Group. More information can be found at: www.FigTreeBooks.net.