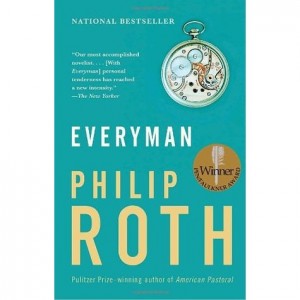 It has now been about three years since Philip Roth, then 79, famously announced his retirement from fiction-writing. In a look back over Roth’s career—spanning half a century and 30 books—Everyman (2006) might fade into the background, especially given the book’s novella length. But to overlook it would be a mistake: This is a near-perfect fable about the life we build through decades of small choices and the death that is always lying in wait, whether we feel ready or not.

Everyman opens graveside at the funeral of an adman and jeweler who spent his last years in a New Jersey retirement village, teaching art to his fellow residents. The fact that this protagonist remains anonymous allows him to take on the title role of the medieval Everyman. As his three children and older brother speak their tributes, we learn about his upbringing in a secular Jewish family with a jewelry business. This all serves as something of a post-facto prologue, though, because the narration soon slips into a close third person perspective through which Everyman, shortly before death, revisits and recounts his own past.

Brushes with death – both others’ and his own – are this man’s lens for looking backwards. He remembers his first dead body, a drowned World War II seaman who washed up near the family’s summer home. After a childhood hernia operation, he believed his hospital roommate had died, though he was assured the boy was only moved to another floor. Over the years, this man undergoes many additional surgeries, from a simple appendectomy to a quintuple bypass; his narrative gauges the passage of time by noting who was waiting for him when he woke up from anaesthesia – his mother or one of many wives or mistresses.

If we may have cringed at Portnoy’s Complaint (1969) for its raunchy sexuality, here we may shrink from graphic surgery details. By the time the protagonist is in his sixties, he is hospitalized at least once a year. His health problems no longer seem so minor; this mortal coil is failing him: “He’d married three times, had mistresses and children and an interesting job where he’d been a success, but now eluding death seemed to have become the central business of his life and bodily decay his entire story.” Former colleagues and fellow retirement community members are succumbing all around him. “Old age isn’t a battle; old age is a massacre,” he thinks as he pays his respects to the patients and their survivors.

Coming full circle, Everyman closes with another cemetery scene as the protagonist visits his parents’ graves and hears a gravedigger explain the nitty-gritty of burials. There is an echo of Hamlet here as our Everyman realizes that he, too, will soon be reduced to bones. This is Roth stripped of his bombast, humble before the inevitable fact of death. Everyman, as an expertly constructed short novel and a powerful memento mori, is an ideal introduction to Roth’s later work.

Bio: An American transplant to England, Rebecca Foster is a full-time freelance editor and writer. She reviews books for a number of print and online publications in the US and UK, and blogs at Bookish Beck.